Tory’s Mitzvah projects are related to her Torah portion, Noach (Noah).  Even though surrounded by vast amounts of water during the biblical flood, it is unclear if it was safe for Noah and his family to drink.  In the world today, 1 in 10 people lack access to safe water, and 1 in 3 people lack access to a toilet.  Through the organization Water.org, over
6 million people in 14 countries have gained access to safe water and sanitation by receiving affordable financing through small, easily repayable loans.  Tory will be making a donation in honor of her Bat Mitzvah to help the work of this important organization.

In the story of Noah, God told Noah to bring a certain number of each land animal aboard the ark in an effort to save their species from extinction after the flood.  While water and sea animals were in safe territory during the flood, thousands of years later humans are showing little regard for the many ocean creatures that are today dying due to the pollutants and trash that can be found in our oceans and lakes.  Sadly, a sea turtle, or any other animal, can’t distinguish between a plastic grocery bag and something that resembles food, such as a jellyfish, and they are dying because of the inability to digest the trash.  Common plastic items, such as straws, are also causing distress to our ocean life as can be seen in this video.

Tory is asking that her friends and family take a few minutes at her Bat Mitzvah to look over a display that will help them understand the plight of these animals and how you can help reduce the amount of trash that ends up in our waters.

One way to start is by saying: 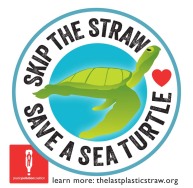 Learn more and take the “Skip the Straw”  pledge HERE!

In addition, you can learn more about protecting our oceans from the Ocean Conservancy.